NATIVE SEED COLLECTION -Throughout the watershed

MAPPING NATIVE GRASSLANDS – KING RANGE
This year our crews set out to map as many populations of native grasses we could find and to explore new areas where surveys had not been completed. After surveying over 1000 acres of coastal prairie on Oat Ridge, Spanish Ridge, Paradise Ridge, Johnny Jack Ridge, and Prosper Ridge, a number of new populations of all the species above were discovered on all of these ridges. One large population of Nassella pulchra (the CA state grass) was also discovered on Spanish Ridge. This grass was not known to exist in the King Range! This data will help us to better track the increase or decline of these populations.

MONITORING – SPANISH FLAT
Planting sites on Spanish flat were revisited to determine plant survival of 10,000 grass plugs planted in 2008. Plant survival ranged from 85% to 95% for individual species and 94% over all.

NATIVE GRASS PLANTING – PROSPER RIDGE AND PARADISE RIDGE
Grasslands planting crews braved the strong winds of Prosper Ridge and the rain on Paradise Ridge to give our grass plugs a new home. 15,000 grass plugs of leafy reedgrass, CA. oat grass, tufted hairgrass, CA. melic, ID
fescue, Junegrass, and CA. oatgrass were planted on these ridgelines this fall. This project is the start of a multi-year restoration effort to establish native grass populations through broadcast burning and planting. 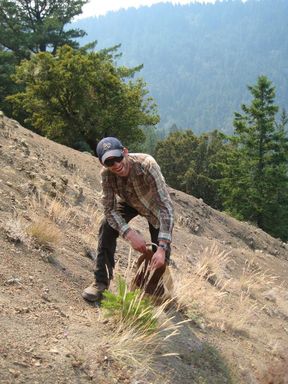 Seed Collection
During the summer of 2008, the MRC grasslands crew combed miles and miles of grasslands to identify native grass populations and collect 53 lbs. of native grass seed from sites throughout the King Range National Conservation Area and private lands in the Mattole. This seed was used for re-vegetation projects in the fall of 2008 and 2009.

Prosper Prairie Grassland Reclamation
In the fall of 2008, an MRC thinning crew removed about 3 acres of Douglas fir that was encroaching on Prosper Prairie. Post thinning sites were raked and seeded with Bromus carinatus and Elymus glaucus. 1 year old plugs of Bromus carinatus and Festuca idahoensis were also planted on some sites. Some sites were mulched with native grass straw collected on site. Sites will be monitored and maintained for 5 years.

Paradise Ridge Fire Rehab with Native Grasses
In October, the native grasslands crew re-vegetated nearly 3 acres of dozer lines that were cut during the Paradise Fire in the summer of 2008. With hopes of re-establishing native grass populations and stabilizing these dozer lines, we distributed over 100 lbs. of Elymus glaucus and Bromus carinatus seed on grassland sites and nearly 50 lbs. of Ceanothus thyseflores and Manzanita sp. on chaparral sites. These sites will be monitored for 2 years.

Spanish Flat Fire Native Grass Restoration
Spanish Flat burned in the summer of 2007 and was seeded with Elymus glaucus and Bromus carinatus in November of 2007. The area was planted with over 10,000 plugs of Calamagrostis foliosa, Koleria macnathera, and Deschampsia cespetosa in November of 2008. These sites will be monitored for two years.