The GRCC program is working to reduce sedimentation in the Bear, French and Wolf Creek sub-sheds to the Mattole River. The project is scheduled to reach completion in October 2009 with a total sediment savings of approximately 50,000 cubic yards. Nearly fifty culverts were replaced, numerous drivable rock-armored fords were installed on seasonal roads, and miles of road were reshaped to reduce surface erosion. In addition, two arch culverts were installed with the largest site located along Chemise Mountain Road in the headwaters of South Fork Bear Creek. Large stream bank stabilization and fish habitat enhancement projects were also performed in the project area, including a large site visible just upriver from the Ettersburg bridge. 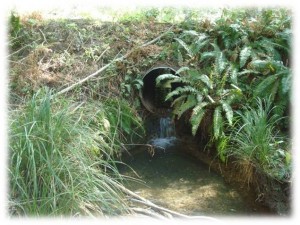 An inappropriately placed and undersized culvert (left) that acted as a partial barrier to salmonids was replaced with a larger and appropriately angled culvert (right – MISSING IMAGE). 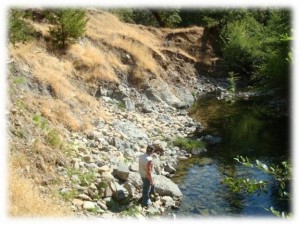 An eroding stream bank contributed large amounts of sediment to all areas downstream. 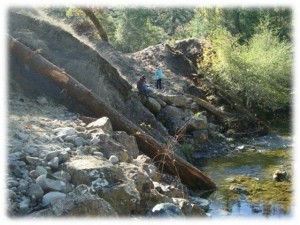 After project completion, the toe of the slide was stabilized with boulders and large wood was placed for enhanced salmonid habitat.