Promoting the recovery of Mattole forests

Forests develop over decades and centuries, a fact that calls upon Mattolians to apply long-term thinking to the future of the forests of our watershed.

The logging of Mattole old growth from the 1940s through the 1990s left the watershed’s forests in need of restoration and recovery. The second-growth stands tend to be so dense and thick that they pose a significant risk of catastrophic wildfire. Such a conflagration would deal a devastating blow both to the human community, scattered as it is amid the re-growing forests of the Mattole, and to the recovery of the watershed. Widespread severe fire would expose soil to the harsh pounding of winter rains, likely triggering erosion that would muddy the waters and reverse the healing that has taken place since the spate of logging and road-building that took place in the last century.

At the same time, the Council’s mapping efforts have revealed that 72,000 acres of the Mattole — more than one-third of the watershed — were last logged before 1962. With the age of the second-growth forests there coming up on half a century, those forests are approaching the age when they might be harvested for timber. From a survey returned by more than 100 landowners, we know that most landowners would consider harvesting timber from their land, a figure that rises to 80 percent for owners of parcels over 640 acres, who control the majority of the private land base.

Accordingly, we are developing a mechanism to make it easier for those landowners who wish to harvest their timber to do so with a light touch. The Mattole Restoration Council is preparing a Program Timberland Environmental Impact Report (PTEIR) that will give landowners streamlined approval for their logging plans, provided they are conducting light-touch harvesting as described in the PTEIR. For more details, visit the PTEIR pages or follow the links at the bottom of the page. 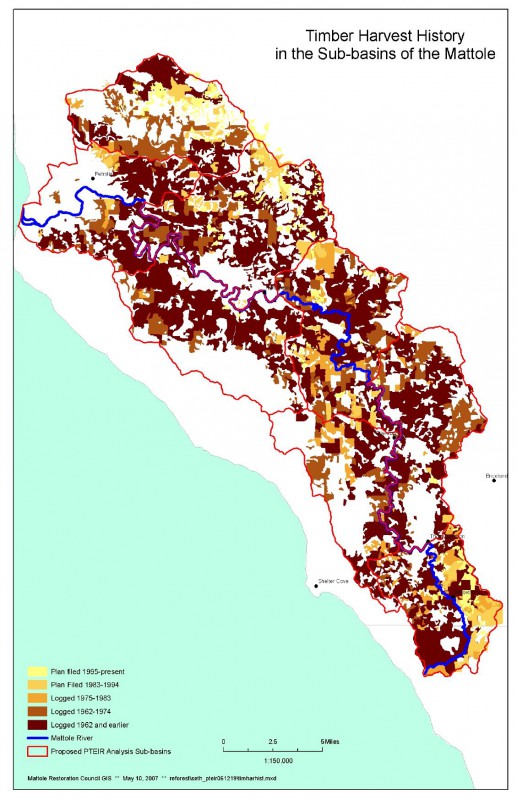