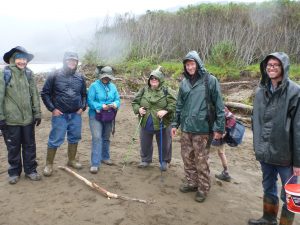 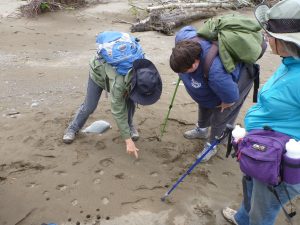 Despite recent rains,we encountered tracks made by coyote and deer, and when we went to investigate an area where otter tracks had been seen the day before, we were in for a grand surprise. The otter tracks, sadly, had been washed away by rising estuary tidewaters, but as we stood in the area, one of the boys participating in the course nonchalantly stated, “there’s an otter.” We looked, and there was a river otter swimming about twenty feet in front of us. “Wouldn’t it be cool if he climbed up on the bank and made some tracks for us?” Kim joked. The otter obliged. We watched as the otter clambered out of the water through some wet sand (perfect tracking substrate!) and then frolicked in a patch of dry sand, rolling around and showing us his white underbelly. As we photographed and gawked, he then defecated and eventually returned to the water. 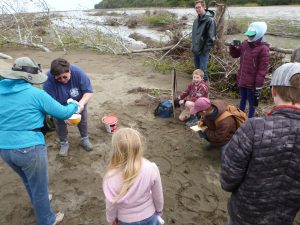 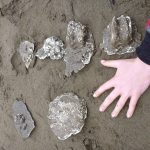 session of learning about otters. The children present particularly loved learning how to pour plaster to make casts of the tracks. Kim taught us some fundamentals of tracking lost humans, and how to differentiate various animals’ tracks.  Our day was cut short by a powerful rainstorm, but all were energized and grateful for the magical encounter we’d had with the otter, and for another beautiful day out in the field in the Mattole.