Written by MRC Admin on September 20, 2014. Posted in General 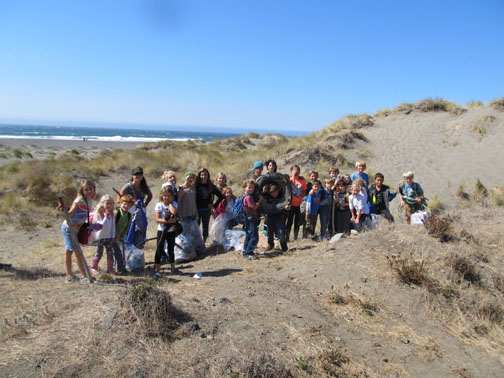 Thank you local students who participated in the California Coastal Cleanup on Saturday September 19th! The students took part in a greater statewide effort that in Humboldt County alone cleaned up 62 locations. This coastal cleanup is an important step to changing our relationship with the ocean and keeping as much human made marine debris out of the ocean as possible. The students cleaned two main sites. The team from Triple Junction High School included 9 students and two teachers and Cassie Pinnell,  ED of the Mattole Restoration Council cleaned the North Fork site just upstream from the Mattole Estuary. 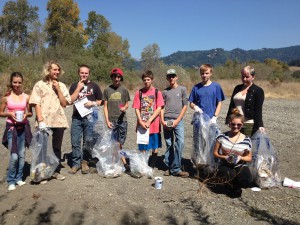 This site is frequently used for recreation, including an annual 4th of July community gathering. They succeeded in preventing 15 pounds of trash from washing out from our river system into the Ocean, including nearly 2 gallons of broken glass and large amounts of exploded firework debris. Additionally this team visited the Mattole Beach where they picked up two pounds of marine debris including 29 pieces of small trash that otherwise could have become ingested by marine life. 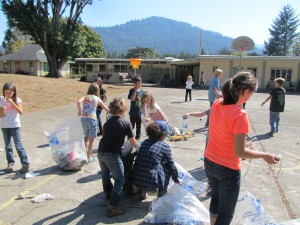 The Mattole School’s K through 8th grade students, along with three students from Honeydew School, four parent volunteers, four teachers and team leaders Unity Minton and Monica Scholey from the Mattole Restoration Council cleaned 2 miles of seven mile beach and picked up 29 pounds of trash and recycling. The K-8th students brought the trash back to school to sort it and recorded data on what they found. They are planning on doing a creative re-use art project with some of the trash.  Additionally, we found one plastic piece that is probably tsunami debris with Japanese writing that looked like it was part of a fan. This was recorded for the statewide effort to understand the distribution of tsunami debris on our beaches. Participation in the coastal cleanup is just the beginning for these local classes who are taking the coastal stewards pledge and participating in the Mattole Youth Environmental Stewards program. All year the students will be actively engaging in their place in space, the Mattole, and proving that their actions are currently shaping the future of the Mattole. The MYES program is funded by a generous grant from the CA Coastal Commission Whale Tail Program.