Written by MRC Admin on September 27, 2016. Posted in Education and Outreach 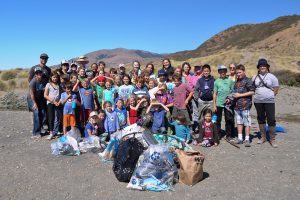 The morning sun rose over the golden hills of the Mattole Valley promising a beautiful day for the annual California Coastal Cleanup.

On Friday, September 16, the Mattole Restoration Council (MRC) teamed up with the Mattole and Honeydew schools to participate in the largest volunteer event in the state of California. This event was the 3rd consecutive year that the MRC has combined forces with the local schools to participate in the cleanup and, once again, it proved to be a success. With almost 60 volunteers, students and adults paired into teams to scour the beaches near McNutt Gulch and collected over 176 pounds of trash! Some particularly interesting items were discovered including a crab trap, some metal sheet roofing and some large plastic objects with Japanese writing on them.

The 2015 California Coastal Cleanup efforts resulted in the collection of 1,142,977 pounds of trash from beaches all over the state and in Humboldt County a total of 13,435 pounds of marine debris were removed from our local beaches. Keeping our beaches clean is not only important to preserve the natural beauty of our coastline but is also vital to prevent harm to marine wildlife. These animals (and even people!) can be harmed and sometimes killed by marine debris in various ways including entanglement, ingestion and the disruption of their natural habitat. Every piece of trash that is collected and removed from our beaches can potentially save an animal’s life. So hats off to each and every volunteer that participated in this year’s Coastal Cleanup and we look forward to seeing you out there again next year!