The Mattole watershed encompasses 304 square miles within the northern California Coast Mountains, some of the most rugged and geologically active land in California. The Mattole River flows completely un-dammed for 62 miles fed by over 74 tributary streams, from northern Mendocino County to its mouth at the Pacific Ocean, 10 miles south of Cape Mendocino. 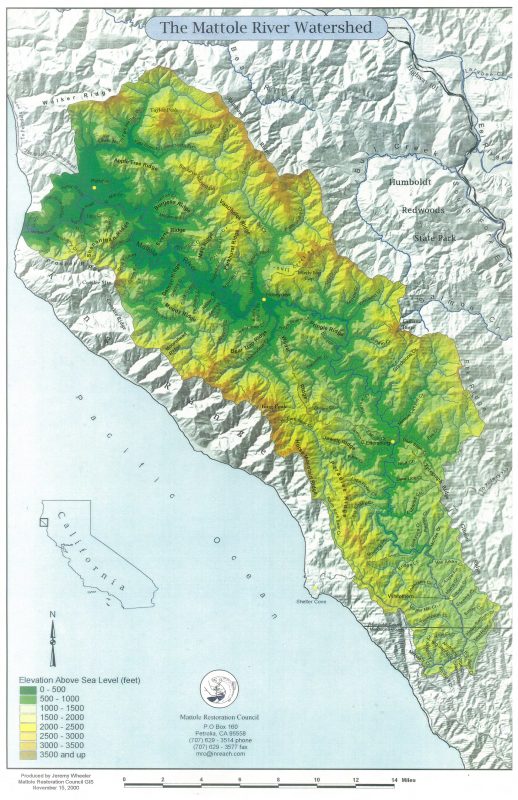 The Mattole River is in an extremely geologically active and unstable watershed that is choked with sediment, which reduces its capacity to support fish and other aquatic organisms. Before wide scale timber harvesting, erosion occurred slowly over thousands of years, and the river could transport sediment at a rate roughly equal to the input of new sediment.

From the 1940s to the 1970s, intensive timber harvest and other land use changes created hundreds of miles of poorly built roads. Combined with the floods of 1955 and 1964, many deep pools that used to exist in the river filled in, and the river channel became flatter and wider.

These changes have redefined the geomorphology of the river. In response, the Council initiated the Good Roads, Clear Creeks Program in 2001 to assist landowners with sediment reduction. Based on the recommendations in the Council’s 1989 report “Elements of Recovery,” this was an important strategy for assisting the river’s return to its pre-timber harvest condition. After many years of working to reduce sediment loading into the river, we estimate that 2 million cubic yards of sediment have been prevented from reaching streams. Our current focus is on restoring native ecosystems (grasslands, riparian, oak woodlands), sustainable management of working lands (forests, grasslands), collecting and disseminating information about Mattole watershed processes, and supporting the community through education and outreach.